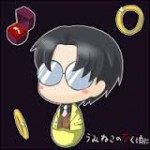 Do you think legalizing marijuana in the U.S will be a good choice?