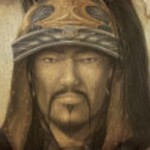 Does a baby have a Constitutional right to not be murdered?