Hay Brits did the Boris survive the 19 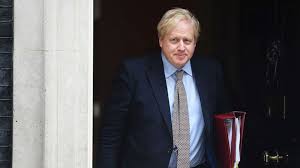 Tell me about it there you Brit Dummies !