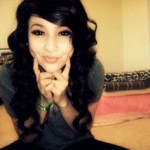 I guess I'll let you guys know some things about me :)
I'm a democratic socialist
I'm half Mexican, half French
I'm a nerd at heart, but my style is more goth
I'm an atheist
aaaaaaaaaaaaaaaand I love spicy food ;)