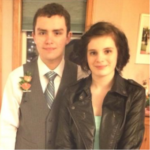 If you were in the middle of a Zombie Apocalypse, what Weapon would you use?

There are all kinds of weapons to be used in a Zombie Apocalypse, I for one would choose either a SPAZ12 or a FG42 personally. What would you use?