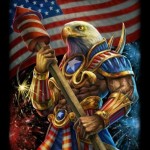 In the words of Steven Crowder “change my mind.”