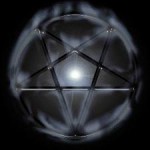 Religion between Satanists, and Christions or Catholics