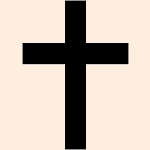 Srom1883 is possesed by a demon

If we all join together in prayer, God willing, we can send this demon back to hell where she belongs (this particular demon happens to be female) and srom1883 will stop making a mockery of the Lord of Hosts.