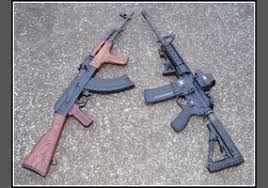 So which one of these weapons is set up on the AR Platform ? What might AR stand for ?