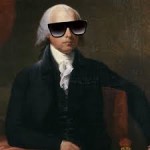 Which is more powerful, the Congress or the Executive?

Take into account all of the enumerated, expressed, and informal powers of each branch. Make three claims and then counter others.