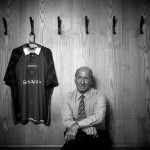 It is still not clear was Kaddafi’s policy correct.