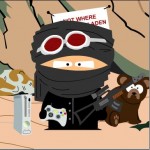 should there be a license to kill

this was brought up by joe in a debate