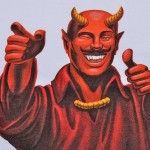 Joined:
1 year ago
2 most recent arguments.
View All

This depends on how you define Atheism. Gnostic atheism (the position of 100Îrtainty that there are no gods) may be an intellectual error, as a true gnostic atheist has invested as much faith as a theist has.

On the other hand, the position that most educated atheists seem to take, the position that "I am not convinced that god exists". By definition, this is atheism, or if you want to be more specific: agnostic atheism. This is not an intellectual error, this is saying that there is insufficient reason/evidence to invest belief in a god(s).

There is a separate set of laws written for Hebrews for "indentured servitude", however this set up does not account for all the laws concerning slavery. Besides, even if you cannot compare Old Testament slavery with the horrors of "The Slave Trade" we all know about, you still have a supposedly divinely inspired book condoning the ownership of another human being as property, and treated as such. That alone should be a turn off to the modern individual, and that's without going into the specifics.

View All
DevilApostle has not yet created any debates.