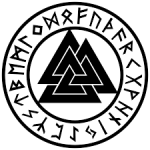 Joined:
4 years ago
10 most recent arguments.
View All

I thank you for your kind words, however I will not join you in the worship of your god. Instead I will offer you my own prayer.

All father, lord of lords,

Though he walks a different path than I, hear my prayer.

May Odin grant you wisdom on your journey,

May Thor grant you strength on your path,

May Loki grant you laughter as you go.

I am bisexual and I do believe it is a mental disorder. However I do not believe that is a bad thing just as a sociopath also has a mental disorder but they have done nothing inherently wrong their brain simply operates differently.

Notice how there is no link provided to the website your article is describing.

Although I am pro choice I do support defunding planned parenthood. My reason for this is that I don not believe that government funds should go to any multinational organization. And before anyone ask, yes that does include the Red Cross.

Wicca is unrelated to Satanism. It is a group of religious traditions. Some are highly structured, while most are eclectic. Many, perhaps most, Wiccans are solitary practitioners. Wiccans are, in many ways, directly opposite to Satanists:

Most Wiccans worship a Goddess and her consort, a God.

bullet They do not recognize Satan or any other all-evil supernatural entity.

bullet Their prime symbol is the exact opposite to the symbol used by Satanists. It is the upright pentagram -- a 5-pointed star with two points downward and one up. Sometimes it is enclosed by a circle to form a pentacle.

bullet Their groups are generally called covens, not grottos or temples.

bullet Their rule of behavior is called the Wiccan Rede: "An it harm none, do what thou wilt." i.e. do whatever you wish, as long as it harms no one, including yourself. Wiccans are not allowed do dominate, manipulate, control, or harm others.

Wiccans believe that they worship neither the Christian God nor the Christian devil. They worship a Goddess and a God. Neither is at all similar to Satan. Wicca, and other forms of Neopaganism, are as different from Satanism as Hinduism is from Christianity.

I prefer not to use sources called things like bible hub so let's look it up with another sources.

But still you didn't answer the question are all gods that aren't your god "the devil"?

I was really happy with this and I agreed with you completely until I got to very last sentence.

no man shall have another,

although he come a stranger to his house.

Many a one thinks himself wise,

if he is not questioned,

and can sit in a dry habit."

Your last sentence is false here is the definition of witchcraft

the practice of magic, especially black magic; the use of spells and the invocation of spirits.

So a question for you.

Then I apologize I miss understood your original comment.

Would you support a American theocracy?
Winning Position: No

All liberals have the same views on all issues.
Winning Position: Liberals are all brainwashed

To be homosexual is to hav a mental disorder.
Winning Position: I disagree