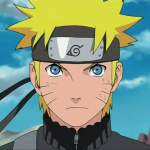 Why do you say that? I don't really drink milk because it doesn't go well with my daily 600 bowls of ramen.

I remember him! He was a major pain in the bungus hole, believe it tebayo.

Uchiha used to be the police cops in ko9noha, then they all g0ot murdered and stuff

I refuse to serve anyone period because I'm the Hokage and I totally kick ass tebayo.

Do you think males & females are innately different? If so, why? If not, how so?

Yes, one has a dick and balls, the other has a uterus etc. There are also nearly-universal trends when it comes to characteristics like upper body strength, intelligence, temperament etc. Women tend to devote more grey matter to social awareness, whereas men tend to have more spatial awareness and better reflexes etc. There have always been exceptions, and there is a potential for there to be more exceptions. Much of the difference in brain structure and behaviour is due to social conditioning. The basic biology of males and females is hijacked by society and used to engineer "girly girls" and "good little soldiers". In other words, Males and females have different hormonal balances which lead to different propensities but that does not mean it's normal for females to obsess over fashion and celebrities or for men to obsess over football and explosions, this is the nonsense that society programs people with. It's even worse now because they're trying to turn the men into women and the women into men. The result is that masculine and feminine human mentalities don't exist anymore. Now you can either be a cuck, a mindless brutish barbarian, a woman that's actually a man, a man that's actually a woman, or a celebrity culture following witless bimbo. As long as you don't actually think, society will accept you.

In sum, there are innate differences, but much of the psychological aspect is due to social conditioning.

Antrim, you have been conditioned to an uncivilized society just like I was. I understand better than anyone why so many people think the way you do. Trying to explain this to you is like trying to convince a prehistoric sand nigger that man will some day walk on the moon and that his great great great great great grand daughter will dress like a ninja and get molested by 50 men by the time she's ten.

Humans (assuming they don't go extinct or devolve) will not always be as primitive as they are now. You are a primitive bongo compared to me who cannot comprehend what it means to be civilized. I bet you haven't even heard of the kardashev scale you primitive ape.

I think you tend to disregard a lot of what real-life people actually are. Most of your ideology is base on the ideal that people should somehow (magically?) behave differently.

This is precisely the opposite of the truth. Our current society disregards what makes humans the way they are. I know the scope and variability of what they call "human nature" which does not exist. Our current society is the one that assumes "people should somehow (magically?) behave differently." without applying any scientific understanding of human behaviour to alter the conditions which produce insanity or destructive behaviour (i.e criminality). My "ideology" is that we have to scientifically understand what makes people the way they are and abate the factors which make someone a piece of shit. The current status quo just says "welp someone just committed a crime again, let's lock em' up, blame their illusory free will for their actions, and not do shit to change society."

In light of your first point (1. Politics can never solve social problems at a root level, because politics is just another element in the soil in which social problems take root) how do you propose to propose accomplishing numbers 2-6?

With reason, virtue and freedom. The opposite of politics.

Are you really trying to say that the violent and criminal nature of mankind can be stopped by tutoring?

Hello imbecile, as always you are incapable of recognizing what truly makes humans the way they are. I am not talking about taking extra classes or hiring a tutor when I say education, I'm talking about rethinking the entire education system and the way that children are brought up and replacing the propaganda and mindless nonsense in media with more enlightening material.

The "criminal nature of mankind" is a retarded statement, man can be both the most vicious and the most peaceful and compassionate animal depending on which human you are looking at. People can also experience massive shifts in their personality which can usually be linked directly and obviously with their experiences and environment. Some people say it's human nature to be compassionate, then why did Hitler exist? You say that humans are naturally violent, then why did Sidhartha Gautama exist? Because human nature doesn't exist and humans can be either extreme or anything in between.

If humans are exposed to the right conditioning, they can become much more intelligent and civilized than they currently are on average.

It seems to me this is logically inextricably bound to IQ/intelligence also.

Yes it is, it requires a population with an average intelligence which is above current average human intelligence. However, if you where to take an average human out of the shit hole of society and make perfect nutrition available to them all their life and condition them to a much more scientific environment where the snow globe does not exist, they would not only end up with a higher IQ, they would use that IQ in much more productive ways. Education and nutrition should become the new eugenics movement. If critical thinking became commonplace instead of the mere regurgitation of opinions and information and if the public stopped ingesting brominated high fructose fluoride smoothies the world would be a much better place.

There are jewish rabbis who suck baby dicks after circumcision
Winning Position: Undeniable

Which is the better kind of ramen?
Winning Position: Unresolved

What is your Nindo?
Winning Position: Ninja way

Is there such a thing as destiny?
Winning Position: Believe it