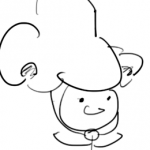 you cannot say that something is possible but also impossible

What? I couldn't resist.

If it is logically possible, then it follows that it is possible in some possible world.

It does not. Modal logic'll assume that it does, but modal logic has a very large flaw in that it assumes that anything that's not illogical must be possible and therefore exists somewhere. Modal logic is not infallible, mind you, and has not existed before the dawn of man, it is not timeless, and it is not entirely sound, and I think it's assumption that possibility means existence in some possible world or another is its biggest flaw. Logical possibility does not equal absolute possibility.(For we do not possess absolutely infallible logic.) Again. Infinite possibilities does not mean that all things are possible, and this includes all other possible realities where the laws of the universe are different.

Its because He is real and you don't want to accept that there is no contradiction.

And someone is getting tired of debating it seems like.

I think I'm going to stop. This was really fun for awhile, but I think we're at a brick wall here. Either way, I think I learned a little, so that's good. Thanks for talking with me, and I apologize if I insulted you in some fashion. Sometimes I do that in the heat of the moment.

Actually, yes it does. If God is not equivalent to a married-bachlor, then He is possible in some possible world.

God is either logically possible or logically impossible. There is no in between.

Logical possibility or impossibility. There is an in between. We don't have hard proof that he's scientifically possible or impossible. Without hard proof, everything comes down to logic, and logic can't prove god. It's a very convincing argument and it's interesting, but when it comes down to it, without accurately measuring the possibility of a maximal being, we're back down to logic. And modal logic is something of a peculiarity because it assumes that things that aren't logically incomprehensible must be possible. Logically possible. Key word being logic.

He is, right now a logical possibility. But. Buuuut.

It's also not logically incomprehensible right now that god's impossible in all possible universes.

Again, it's a cheap parlor trick because it makes the assumption that we know enough about our universe to know whether or not god is possible. We don't.

Yeah. The first premise assumes that god is possible. And we don't know that. Which means it's is a leap in logic.

He could be possible. He's not logically incomprehensible, but, that doesn't necessarily mean that he's possible. It's also possible that people find out that god is impossible.(With hard evidence, mind you.) You can't discredit that possibility. Despite his logical possibility, his logical impossibility can't be discredited. See. This argument uses a lot of really silly leaps in logic. By saying that god is in the gaps, and that we don't have to prove anything because nobody knows, it makes the argument moot. It's a lovely argument to pitch to people who don't have much of a brain.

Personally, I'm fairly on the fence here, and I'm not too afraid of death because I want to know where everything is going, but using cheap parlor tricks and twisting words and logic to make an argument that -seems- to stand on its own without any hard proof doesn't work on me.

I might not be able to entirely articulate what point I'm getting at, and if that's the case, I apologize, but the first premise of this argument is the reason it fails. It makes an assumption and tries to prove that assumption with its further premises. It's a ridiculous little anecdote, but ultimately, the argument is moot, because it doesn't prove anything. What I think I can compare it to the easiest is Pascal's Wager. Not that I'm saying the logic is the same, nor the point, but Pascal's Wager is one of those cheap arguments that tries to sway people, though it does it in a more direct and brutish manner.

Logic can't prove or disprove god. We're human, our thoughts are inherently flawed. Again, infinite possibilities does not necessarily mean that all things are possible. I'm a skeptical believer.

The argument, as philosophers, both theistic and atheistic, have agreed upon, can only be defeated at premise 1, which is whether God is possible or not. Hence, the only way to defeat it is to say that God is logically incomprehensible. If He is not logically incomprehensible, then He is real, by definition. Plantinga even admitted that this is up the the person to decide; however, in what way would He be illogical?

Nonsense! The first premise takes a leap in logic by assuming that such a maximal being is possible in any possible universe.

It's not a very brilliant formula because it doesn't work, ya dork.

Possible because we don't currently possess the knowledge to prove or disprove his possibility.

Really this is a weird failure of language because it's possible for someone to develop cancer or catch a cold, etc, and we know why these things are possible because we can observe and measure these things.

We really don't have any tools for measuring the validity of a god. The idea here insists that god is possible? But what if it's possible that he's not possible? In any possible universe? You can't really discredit the possibility that god is simply an impossibility in all possible realities. Infinite possibilities doesn't necessarily translate to all things being possible, you see.

It's really a silly train of logic, I think.

You're not any particular system.

That's like. Communism. Almost. I mean it's kind of communism. It's at least y'know, economic communism or communismish. But I mean whatever you've gotta do -some- taxes at least and I'd rather be in a society where everyone is forced to work together than the lack of a society where people just shoot eachother and take what they want.

If we're all sinners, why do some people act so high and mighty?
Winning Position: Becasue we're better than you!

I Believe In Uh, Well, Something. Here's Why.
Winning Position: Good!

Apatheism is the way to go.
Winning Position: Yes

We should get rid of the concept of a 'minority'.
Winning Position: Yes

Is Pornography Immoral?
Winning Position: No!

You are never too old for legos.
Winning Position: True