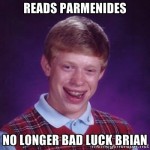 Joined:
10 years ago
10 most recent arguments.
View All

Killing babies would not be immoral, if God were not real.

How did I redefine it? I simply use God as the basis for morality. It's simply false to say that I redefine it.

So, I don't see your point at all.

I don't want to die so I assume babies wouldn't want to die either. One of the nice things I experience in life is growing up and enjoying a variety of things, I want babies to do the same. The act of a baby dying makes the parents of the child suffer. It all comes down to minimising suffering and maximising enjoyment.

Who cares about your wants? I might not want to die as a criminal, but that has no basis for saying that I should not die by the hand of my executioner. You're applying the Golden Rule way to way too extreme of situations. And, you completely forget what I said after: how you moral intuitions would be shaped if humanity were to be commanded differently, in that, babies would be killed morally. So, you're begging the question.

I literally laughed out loud. What reason or logic have you used?

Either genocide is not objectively wrong and we don't know it, or genocide is not conducive to survival. I would suggest the later. How many great minds, that Hitler might have otherwise commanded, simply went up in smoke?

And if genocide is not wrong, then we can list off numerous other things that we know to be morally wrong that have survival conducive elements: rape, theft, etc. You have the burden of proof to find something that is morally wrong, if you are going to challenge the objective moral notion of genocide, rape, and theft, as those, if anything, are the obvious cases of objective morality.

All evidence is gathered in hindsight.

That is begging the question. When doing inductive reasoning, maybe through history or science, you cannot look at things in hindsight to prove what is plausible. Hindsight only proves what is factually correct. Thus, your argument begs the question. You must look at things from a set forth notion, at the beginning of evolution: how implausible gathering objective moral understanding or moral intuitions would be, if undirected.

This begs the question. We know that there are things that are conducive to survival: rape, for one.

All in all, your argument begs the question by looking at things in hindsight and ignoring the implausibility notion.

it is wrong to do to others what you wouldn't have done to yourself etc. I believe realistically this is what it is for you deep down too...

I agree with that. Thats the Golden Rule in the Bible (Matthew 7). That does not mean, though, that it applied in all situations, as a criminal might not want done to him what justice requires of him.

If you saw someone being stoned in the street, screaming in agony for hours for kissing another man and then finally dying in a pool of blood.... I can't believe you'd watch that and then turn to your friend and say "they did right".

The problem still runs, but is made deeper. You're, what appears to me, looking at things in hindsight: we have moral intuitions, and we have understanding, so we just got understanding and moral intuitions from evolution, though it just so happened to happen. The problem with this is obvious: from a starting point, evolution does not have an end. Its only end is survival. It is, thusly implausible to say that we would get understanding, let alone understand or have moral intuitions about morality. I never said that this is a necessary argument; it can easily be imagined that God is not required here, in a possible world. The issue is plausibility: a blind evolutionary process that makes us believe genocide is wrong, when genocide is conducive to survival? In what way is this reason giving?

No, there are some laws in the Old Testament that do apply, and can be applied today. One of the groupings is sexual immorality, as the New Testament makes clear that is immoral. Dress is said in the New Testament to be fine. So, no, stoning others for homosexual actions, if the government were to regulate it, would be moral, as the law is still under moral law.

Alpha Privative in Greek..
Winning Position: I do not agree with Greek

There is no reason for the gay marriage movement....
Winning Position: No

Does this answer what the "higher good" is for the problem of evil?
Winning Position: Yes

Should Phil Robertson be kicked off of Duck Dynasty?
Winning Position: No

A "hierarchy of good" is proof of a good God.
Winning Position: No

Is laughter a means or an ends?
Winning Position: Means