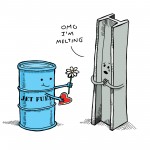 You're getting a litttttttle unhinged.

She has no policy on same sex marriage, as the issue is already settled by the courts.

I've been struggling for some time to come up with an understanding of that comment that isn't incredibly fucked up and I just can't.

Because to call her the most corrupt American politician of all time ignores the politicians who were actually, legally corrupt.

Here's a basic list that shows you what legitimate corruption looks like. Hyperbole serves you no good.

Did not want to discuss the mishandling of classified information.

Did not want to discuss having an illegal server to bypass the freedom of information act.

She did discuss it, and appologized for it. There's nothing else she could have said about it while still being a smart politician.

Did not want to discuss her arming and backing ISIS.

Did not want to discuss Bill's sexcapades or her assault on his plethera of victims.

No shit, she isn't Bill Clinton.

Did not want to talk about TPP which she rejects in public, at least this week, but supports in private per wikileaks.

She did discuss it.

Did not want to talk about Her globalist agenda per open borders per wikileaks.

"globalist agenda" really is meaningless. She did discuss immigration and trade.

Did not want to talk about the danger of thousands of Syrian refugees flooding into Europe and America causing violence, rape, and anarchy in every European country they enter to the point of civil uprisings to stop it in those countries.

Probably because that isn't happening, and isn't going to happen.

Do you even read your wikileaks citations? Because the actual content in them hasn't backed up anything you've claimed, short of her not supporting same-sex marriage.

It's hilarious how horrible your perception of gender relations is.

So if someone's genitalia works then they must imagine sexually assaulting people?

What kind of toxic-as-fuck perception of sexuality do you have?

So every male politician is guilty of of sexual assault

and most likely you are too... or?

In most likelihood, you are a liar.

You'll try to honestly in a religious-like self righteous position, try to convince us that you have neither ever said or thought about doing the things he said out loud?

Of course I did, when I was a child who didn't know any better.

You my friend, are? A liar, which makes you worse than him

Except you really have no basis for calling me a liar. You don't know me, and have never met me, yet are trying to claim you know how I think about women. It's silly, to be honest.

And let's fully ignore that it was 12 years ago.

Yeah, except he still talks about women in incredibly disrespectful ways. Currently.

Your clan are the same geniuses defending a 60 year old pedaphile's right to be in the stall next to a 7 year old girl.

Not a single person has "defended" that, oddly enough.

Still not a liberal. Seriously, enough with the partisan shit.

A large number of presidents spent more money than all their predecessors combined.

That's nothing new, at all. On top of that, Republicans contributed substantially to that debt.

Mark Cuban To Trump: $10 Million for Policy Interview
Winning Position: No, because...

Trump Calls for 4% GDP Growth
Winning Position: No, because...

Did Trump Lie About the Flint Speech?
Winning Position: Yes

Trump: "I will repeal the Johnson Amendment"
Winning Position: Yes, because...